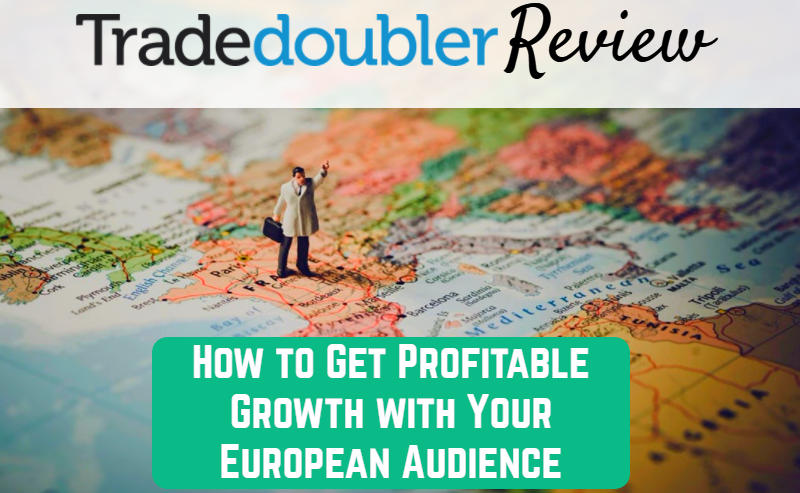 Tradedoubler Review: How to Get Profitable Growth with Your European Audience

How many times have you had a Nigerian prince email you saying that he wants to send you money?

Or what about those pop-ups that scream at you in all caps: YOU’VE WON!!

Thankfully, most of us are quite familiar with these common scams.

We’ve developed a sort of sixth sense for scams and we’re quick to avoid them.

Sometimes, looking at different opinions and speculation published online, we may doubt whether something is truly legitimate or whether it’s just pretending to be.

When you search for reviews of the Tradedoubler affiliate network online, you’ll see the word “scam” come up in connection with it. As a result, you might reasonably wonder, “Should I get involved with this affiliate network?”

If you’re asking that question, you’re in the right place. We’re going to answer that question while giving you a full review of the network. Is Tradedoubler really a scam? Or is it what it claims to be: A top affiliate network helping businesses and affiliates connect to reach their goals?

It’s time to find out.

Tradedoubler Review: How to Get Profitable Growth with Your European Audience

Tradedoubler was founded in 1999 by two young Swedish entrepreneurs. So, this company has quite a history behind its name.

Today, Tradedoubler has offices in the UK and multiple countries throughout Europe, including Sweden, Germany, France, Poland and Spain.

Their focus has always been to provide smarter results for both clients and affiliates through technology.

In 18 years, they’ve amassed an army of 180,000 active publishers, connecting them to over 2,000 merchants in Europe and the UK. Many of these merchants are household names.

Why You Can Trust Tradedoubler

Rated One of the Top 20 Affiliate Networks for 2017

Every year, mThink creates a list of the top affiliate networks, checking to see how they perform for their affiliates. This year’s list included Tradedoubler at number 13, ranking it higher than the popular network Pepperjam.

Almost 2 Decades in the Business

When you see a company that has lasted many years, you know that you’ve found a solid and well-liked company. Tradedoubler passes this test with flying colors, having been in business for over 18 years.

However, Tradedoubler once again passes this test, having plenty of big names as merchants. Some of the merchants involved in their network include Philips, ING, The Body Shop, HP and others.

Features That Make Tradedoubler Stand Out

Tradedoubler boasts doing business in over 70 different countries in the world and has offices scattered across Europe.

Because of this, they’ve made it easier for their affiliates to get paid, no matter where they are. On their website, Tradedoubler says that publishers can be paid in the currency of the country in which they operate.

Just keep in mind that, while you can participate from anywhere in the world, your site must have a significant UK audience.

Obviously, for your affiliate commissions to be tracked, the user will need to have tracking cookies in their browser turned on.

It’s true: The great majority of people who are online leave tracking cookies on without giving it a second thought. But what about the people who turn off cookie tracking?

Tradedoubler has developed technology to track affiliate sales even when the browser has cookies turned off. More and more merchants are jumping on board with this program, allowing publishers to get every commission they deserve.

Like other affiliate networks, Tradedoubler offers the common CPS (cost per sale) model, meaning that affiliates get paid a percentage of each sale when the customer is referred through their affiliate link.

However, Tradedoubler also offers a CPL (cost per lead) model. This means that merchants pay affiliates when they refer a lead. This might mean getting someone to sign up for a free trial, a newsletter or something similar.

Tradedoubler also offers CPC and CPM models, which means that affiliates can get paid per clicks or impressions. However, there are very few merchants who are involved in this type of marketing, so there are fewer opportunities for these two pay events.

The Pros and Cons of the Tradedoubler Affiliate Network

Is Tradedoubler Right for You?

Today, we’ve been able to see that Tradedoubler isn’t a scam. In fact, it’s a reputable company with a history of almost two decades in the business of affiliate marketing.

So, how can you tell if Tradedoubler is right for you?

Mainly, it will depend on the location of your audience. As we mentioned before, only websites with a large amount of UK traffic are allowed into the program.

So, if your website has a mainly UK audience, congratulations! Tradedoubler might just be the place for you to succeed in affiliate marketing.

However, if your website doesn’t have substantial UK traffic, it’s probably not worth your time to apply.

Unlike the Nigerian prince and the unexpected winnings, Tradedoubler isn’t a classic internet scam. Neither is it a new, more deceptive scam.

It’s a company that’s respected and that has grown into one of the world’s top affiliate networks.

That being said, Tradedoubler does have its faults. And while it did make the list of the top 20 affiliate networks for this year, there are plenty of fantastic affiliate networks that ranked higher on the list and that may be more suitable for you.

All in all, we’ve seen the good and the bad of Tradedoubler.

It’s up to you to decide how well your affiliate marketing strategy fits with this top affiliate network.