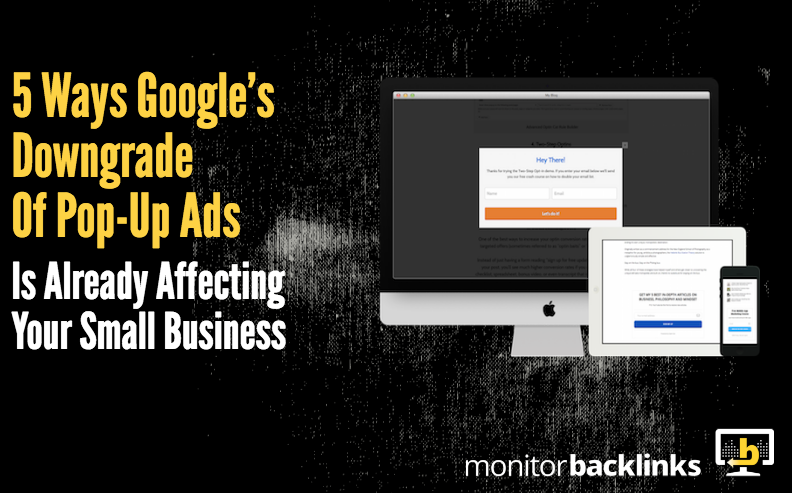 It’s a pop-up world out there. As a small business owner, you work tirelessly to attract visitors to your site and convert them into paying customers. And, if you’re like millions of others marketing your business online, at some point you’ve used pop up ads to reach your target audience.

Recently, Google announced it will start punishing websites that use pop-up ads. You know those pesky banners and giant optins that show up on just about every website? Yeah, those…

It turns out that enough users complained about the ads that Google finally decided to do something about it. Google plans to lower the rankings of websites that use several types of specific pop-up ads in an effort to dissuade business owners from using them anymore.

What does this change mean for you? Read on to to learn the five top ways your small business already is being affected by this ad shift via the world’s largest search engine. It could be the difference between your business sinking or sailing this fiscal year.

Google will begin punishing websites that use pop-up ads that gray out content until the viewer watches the ad or cancels it by clicking the “X” on the corner of the ad. These ads are generally viewed by users as annoying and counterproductive to visiting the site because they veil the information they are looking for until the pop-up ad has finished playing.

It’s a big risk to use this kind of ad. Research shows that users are more likely to leave your site if you can’t get them the information they need. Users don’t want to have to search for the answer they are looking for on your site. They want you to be responsive and helpful. There’s a reason they clicked on your link, and it’s your responsibility to get them collateral as soon as possible. So, try to eliminate these especially annoying ads from your site to avoid getting reprimanded by your user and by Google.

Are you using ads that look like pop-ups but aren’t authentic ones? Remember in this case that perception is reality, and Google plans to treat any ad that appears to act like a pop-up ad like a real one.

What kind of ad does this?

Does your website have an ad that takes up the user’s entire screen space while the webpage is being loaded? Are you using a call-to-action that screams instead of convinces. For example, a CTA such as: “Sign up for our newsletter now!”

If you’re using any of these tactics, Google already sees you as an ad offender. As of Jan. 1, 2017, Google will count these ads as true pop-ups, and as a result you could be punished in the rankings for using them.

#3: The kind of business you are running online will matter

The small businesses that are most likely to be hurt by Google’s change are e-commerce sites and news sites. Both of these types of ventures are known to use pop-up ads regularly to drive traffic and related products and services.

If you fall into this category, then it’s time to get together with your team and think through some experimental options for using viral videos and content marketing in more creative ways. Perhaps this means that you start pushing videos and ads across your social channels more, based upon where you know your target audience is throughout the day. E-commerce and news media sites are going to need to get more creative in the future because they will feel the biggest hit from Google’s change.

#4: But what if I need to collect legal information?

There are many small business owners who need to use a pop-up ad or a banner to collect demographic information for legal purposes. For example, let’s say you need to make sure your user is 18 years old or older.

The good news is that if you are collecting this information via a small banner at the top of your webpage and that banner isn’t taking up the entire screen, then Google will not punish your site. Google has reported that certain demographic asks of users are necessary, making banners and ads acceptable forms of collecting the information.

#5: Get strong in other key areas

A final word: remember that while Google may begin punishing websites that use pop-up ads, there are other ways to improve your ranking. Pay attention to other SEO clues Google has given about search ranking factors. For example, in 2015 Google began favoring sites that are “mobile friendly” higher than those who were not optimized for smartphones and in 2014 Google announced it was the year of encryption.
Of course, you can’t react to every Google announcement and rumor. But, when it becomes clear that a certain attribute is affecting rankings, you can work toward that goal.

You may not be able to take down all of your pop-up ads right now. But you can slowly shift away from using them and increase your search engine rankings by focusing on improving in all of the areas that Google has publicly announced will improve your chances of getting a higher ranking.

In conclusion, a shift in the way pop-up ads are being handled by Google means that small business owners will have to make some changes on their websites.

Aim to strip your website of all pop-ads over the next year. You may not see an instantaneous lower ranking because you have pop-up ads. But Google will use the number of pop-up ads on your site to compare you against all other sites, and eventually that could result in a lower rank if you fail to take down your ads.

Google’s announcement will also require a shift in creative thinking among digital marketers and webmasters. They should begin to think about new ways to attract users through engaging copy and multimedia that are not annoying or intrusive.

Focus on writing that is energized and provides your users with meaningful information. Attract them to your site with strong calls to action and branding that fulfills its promises. At the end of the day, a pop-up ad can be counterproductive to your goal because there always is the chance it will annoy a user if used too frequently.

This is a time for small business owners to re-invent their content marketing strategies and to experiment with advertising across web and social platforms. Follow these five key tips for keeping your small business strong long after those pop-up ads have disappeared.

Ajay Paghdal is the Founder of YouthNoise.com and OutreachMama.com and has been helping business owners and agencies improve their SEO practices since 2012. As a serial entrepreneur, he keeps a constant pulse on the ever changing SEO landscape and is uniquely skilled at squeezing every tiny ounce of value out of a marketing budget. When he is not mentoring his marketing team, you can find him enjoying life with his friends and family.