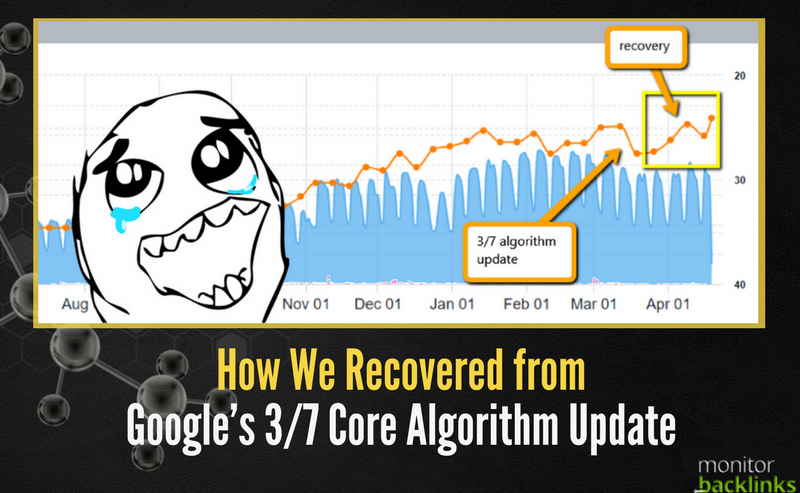 How We Recovered from Google’s 3/7 Core Algorithm Update

In March, SEO world was abuzz with news of Google’s core algorithm update.

Man, did we feel the pain.

Organic traffic to the Monitor Backlinks site took a huge hit. Our keyword rankings were fluctuating all over the place. But it wasn’t entirely undeserved. We had room to improve. So we took action.

I’m happy to say that, since that fateful Google algorithm update on 3/7/18, we’ve steadily been making progress in recovering our keyword rankings and organic traffic.

Naturally, we want to share the good news—and the effective recovery strategy we used—with you guys.

First, a recap of the situation.

Why Did the Google Algorithm Update Cause a Drop in Rankings and Traffic?

As we described in our last blog post about this algorithm update, this was not a penalty we were slapped with. Penalties are arguably much harder to recover from.

Instead, we were suffering while our competitors in the Google SERPs were being rewarded. This algorithm update was specifically focused on rewarding quality content that was previously under-rewarded.

To figure out what happened, we investigated: Which keywords were we no longer ranking for as of 3/7? What did the content associated with those keywords have in common? What was dragging us down while competitors were being rewarded?

When we looked into it, the answer was pretty clear.

How We Recovered from Google’s 3/7 Core Algorithm Update

The strategy for recovery was simple. We needed to improve poor content and publish more, high-quality content. Since we lost rankings for keywords that previously brought us plenty of targeted organic traffic, we also wanted to focus on earning those rankings back.

Here’s the plan we cooked up:

1. Identify the highest-quality keywords that we lost rankings for.

3. Update blog posts that lost rankings, prioritizing those with at least 1,000 words and unique, genuinely valuable content. There were several quality blog posts with good content but poor English usage, typos and other errors easily fixed by proofreading.

4. Work with our current writing team to revisit quality keywords (those identified in #1) that did not have content worth updating. We deemed content not worth updating when it had a more serious issue, such as being very short (less than 500 words long), lacking valuable information or being completely outdated.

Following that plan above started to show results relatively quickly.

The content that was completely gone from the SERPs—and that was given a thorough edit/proofreading as part of our recovery strategy—is now making a comeback.

A few old blog posts rocketed back up to #1 or #2 in Google, where they originally sat. That’s a pretty exciting result, especially considering the relatively small investment of time/energy it required to proofread those old blog posts.

Most didn’t have such incredible success, but they did go from being completely gone from the SERPs to pages one, two and three of Google search results. That’s something.

The new blog posts produced by our incredible team of expert writers are making an impact, too

Overall, keyword rankings and organic traffic are on the rise.

The remarkable thing about the image above? Our average keyword ranking (represented by the orange dots and line) is actually higher than before the Google algorithm update set us back.

In the end, the update gave us the kick we needed to improve our site, which can only serve us well moving forward.

The rest of 2018 is looking pretty promising for us now.

So, how are you guys doing?

Maureen is the Head of Content Marketing for Monitor Backlinks. She's passionate about using SEO and cool digital marketing insights to shine light on outstanding projects, products and programs. Follow her on twitter: @woah_its_moe_