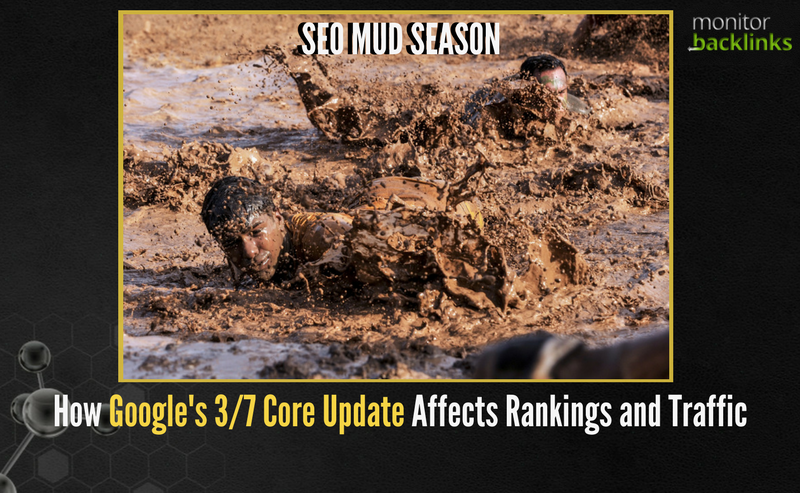 March in Vermont is known as “mud season.”

The sun is out, and our three feet of formerly pristine snow is melting into lakes and rivers of squishy, squelchy, messy mud.

Cars, boots and houses are all covered in miserable splashes of brown.

I’m already not happy about my increasingly wet, brown backyard—now SEO appears to be having a “mud season” all of its own.

Yup, this March has been a mess for webmasters and SEOs.

Many of us experienced a major, unexpected shift up or down in Google’s results pages, watching our keyword rankings skyrocket or plummet.

The reason: Google has made a big core algorithm update. And we’re all feeling it.

Word on the street is it began as early as March 7th. For us, the actual effects materialized around March 12th and just kept coming throughout the week.

Now, over a week later, these changes are starting to slow down, but the update has undoubtedly left its footprint on our rankings and traffic.

It’s even being referred to as “tremors” and “March Madness.” Whether you’ve benefited or been struck down, we can acknowledge the mess such a big change makes.

It’s time to take action, and do some spring cleaning if your rankings have suffered.

As a Vermonter and SEO, I’m no stranger to this kind of muddled mess.

Let me walk you through the Monitor Backlinks team’s experience with Google’s 3/7 update, and how we plan on cleaning things up!

How the March 7th Update Affected Our Rankings and Traffic

First, here’s what happened to our very own Monitor Backlinks website:

We were seeing an uptick in keyword rankings throughout February and early March—right up until the fateful day of March 12th, when we saw a dramatic plunge in rankings, and a corresponding decline in organic traffic from search engines.

Even though the downward trend has tapered off at this point, our organic traffic has taken a big hit. 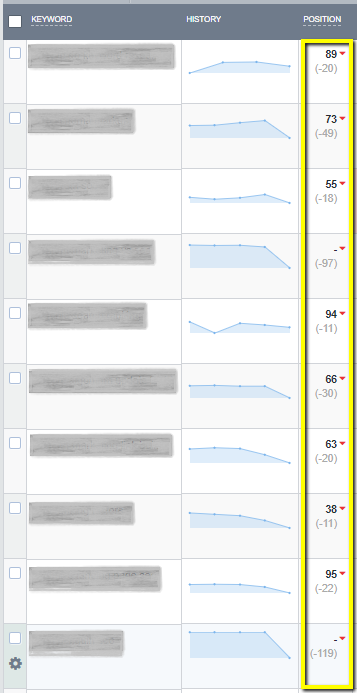 Looking specifically at which content dropped in the rankings, we noticed that they’re mainly old posts which we inherited from the previous Monitor Backlinks blogging team, and share several issues:

There weren’t any blog posts that went up significantly in the SERP rankings during this period—while usually we do see plenty of content on the rise—so there are possibly other sitewide quality issues that we’ll need to identify and address.

Now, compare that to another site we manage. It’s a seasonal affiliate blog (with the months of April to September seeing peak activity each year) which experienced a major spike in its keyword rankings.

The Effects of Google’s Core Algorithm Update on March 7th

It all began with us SEOs waking up and checking out our keyword rankings over coffee.

Then noticing something was up. So, the tweeting began.

Agreed. Was going to tweet this yesterday and was waiting for more data. March madness!

These days, Google no longer gives pet names and makes announcements about updates. It’s up to us SEOs to smell that something’s up, investigate and commiserate.

After sufficient chatter was out there about a possible update, Google released this statement on Twitter:

Each day, Google usually releases one or more changes designed to improve our results. Some are focused around specific improvements. Some are broad changes. Last week, we released a broad core algorithm update. We do these routinely several times per year.

As with any update, some sites may note drops or gains. There’s nothing wrong with pages that may now perform less well. Instead, it’s that changes to our systems are benefiting pages that were previously under-rewarded.

There’s no “fix” for pages that may perform less well other than to remain focused on building great content. Over time, it may be that your content may rise relative to other pages.

Action Plan: What to Do If You’ve Lost Rankings and Traffic

You might be relieved to hear that it’s not a penalty, but in a way this may be more challenging to overcome.

The way to restore any lost rankings, traffic and rich snippets? (Yup, rich snippets, which are directly tied to Google’s measures of content quality, have been disappearing on negatively affected sites too.)

So simple and straightforward, yet so difficult to achieve.

There’s no way around it—you’ll need to do plenty of hard work to improve the overall quality of your site and content.

Here’s the game plan we’re planning on following for the Monitor Backlinks blog:

Our first step is to go through all of our older blog content and improve the lower-quality stuff. Stay tuned for our updates over the coming months!

Did your content experience a major shift up or down in the SERPs? Let us know on Facebook or Twitter. We’d love to hear what you’ve gone through, and chat about how you plan to come back if you’ve been negatively affected.

Maureen is the Head of Content Marketing for Monitor Backlinks. She's passionate about using SEO and cool digital marketing insights to shine light on outstanding projects, products and programs. Follow her on twitter: @woah_its_moe_