What does the updated Google link scheme mean for you?

In the new link scheme, Google has removed the paragraph that says that a site’s ranking is partly based on the quantity and quality of the sites that link to it. Here’s a screenshot of the old scheme (28th June,2013).

And see the new scheme 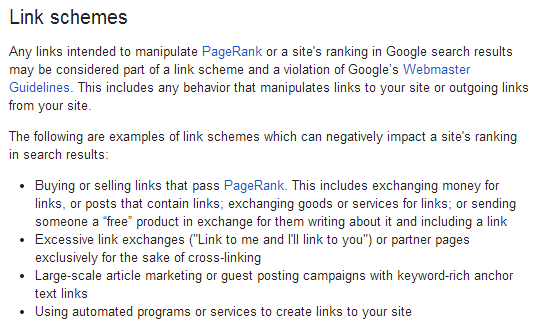 But did you notice that they have not removed the paragraph that says that any link building scheme that tries to manipulate a site’s position in the search engines is in violation of Google’s policies.

So, as some SEO consultants are saying the new link scheme doesn’t imply that the era of link building has met its end. Links are still vital to rank a site otherwise there would have been no reason for all the mind boggling updates directed specifically at reducing link spam.

Links are the backbone of the World Wide Web and the sole reason of it being called a web is because sites link to each other.

Just like in elections, goodwill alone is not something that will give you victory. It needs to convert into votes.

You need to produce awesome content that people would love to link to and share but at the same time the mad updates should not deter you from building links the right way- guest posting, blog commenting, forum posting etc.

At the same time don’t forget that each of these tactics can be overdone to attract a penalty.

Should you stop linking to other sites?

No absolutely not. The fear of losing rankings is causing a frenzy among webmasters so much so that it’s eroding the very core of the Web. You need to link to relevant sources and a blog post or article that cites pages with higher authority than itself is considered to be credible not only by the search engines but also by people.

What does the link scheme say about linking to others?

Buying or selling links that pass PageRank. This includes exchanging money for links, or posts that contain links; exchanging goods or services for links; or sending someone a “free” product in exchange for them writing about it and including a link

Does it indicate that you have to stop linking to others? It only says about paid linking.

But I feel that guest posts may fall under this category since it’s a form of link selling where the host blogger gives a link for a post. But as of now only mass guest posting has been mentioned as something that you should refrain from. But linking out to reliable sources with a “no follow” tag is not considered as a mal practice by Google.

I have also picked out a few relevant videos which will throw some light on what are the best practices in link building these days.

CEO & Founder of Competitors App - a monitoring application that will track your competitions' marketing moves. Ex-founder of Monitor Backlinks.
Passionate about Start-ups and talking to other entrepreneurs.