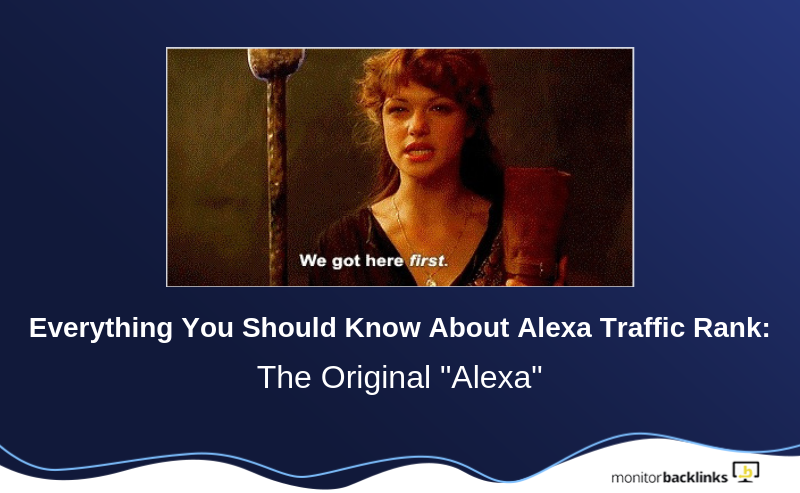 Everything You Should Know About Alexa Traffic Rank: The Original “Alexa”

Long before Amazon’s famed Alexa, there was another Alexa…

It’s been around for what seems like ages (in internet years).

But, is it still a valuable metric?

With the variety of new tools and metrics available to you to track and measure your SEO, should you even bother checking your Alexa Rank?

Below we dive into the depths of internet history to show you how the Alexa Traffic Rank came to be, how it works, and whether it still matters to SEO today.

Everything You Should Know About Alexa Traffic Rank: The Original “Alexa”

What Is Alexa Traffic Rank?

Alexa Traffic Rank is a rank calculator offered by Alexa.com.

You can use this tool to see how your site stacks up against your competitors or some of the largest sites on the internet.

Alexa.com offers other paid tools too, like a keyword research tool, site audit tool and more, but by far their most widely used tool is the Alexa Traffic Rank.

The tool is virtually self-explanatory to use. You input a URL and it shows you the current traffic data for that domain.

Every site is given a ranking number, the lower the number the better.

The main ranking factors you’ll want to pay attention to are the “Global Rank” and the “Rank in United States.”

The more popular the site is, the more accurate the traffic stats will be. So, if your site only gets a few thousand visitors per month, it might not even show up on the tool.

You can also get a glimpse into the history of a site’s traffic numbers and how its traffic stacks up to other sites over time.

Not incredibly useful, but some data is better than none.

What Alexa Rank does have going for it is that it’s been around for a while. Alexa.com was founded back in 1996, which makes it nearly a hundred years old in internet years. It was acquired by Amazon in 1999, and currently operates as a subsidiary of Amazon.

Being in existence that long means that it’s been able to collect a ton of data.

In fact, in the past, it was used to provide the database for the site Wayback Machine.

How Does Alexa Traffic Rank Work?

The Alexa Rank is based on two different datasets.

Basically, to get a high Alexa Rank, you not only have to get a lot of traffic, but that traffic has to stick around and check out a lot of different pages.

On the surface, this is a pretty valuable metric.

If you have a site with a lot of traffic, and that traffic spends a lot of time on your site, then you probably have a super valuable site.

Plus, there are built-in features that can prevent sites from artificially inflating stats, like if you refresh a page multiple times it won’t count as multiple views. (Not sure why you’d try to inflate your stats, but it’s nice to know there are safeguards against it.)

With Alexa Rank, you can determine the general traffic levels of your site and your competitors’ sites.

Here’s the short form of what Alexa Traffic Rank can tell you:

How Alexa Rank and PageRank Are Related

Alexa Rank from Amazon and PageRank from Google are two related, yet highly different metrics. You’ve probably heard them tossed around in conversation, or deep in the comments section on your favorite SEO blog.

Here’s how the two stack up:

Alexa Rank will tell you how much traffic a site is getting (plain and simple), at least according to their dataset.

It won’t give you anything related to backlinks, the quality of the pages or anything else, however. Think of it as a strength indicator for the website as a whole.

On the other hand, you have the PageRank metric. This one might be a little more familiar, as it can be a useful thing to track when you’re analyzing the competitiveness of certain markets.

PageRank is a metric that’s offered by search giant Google. This metric tries to quantify the strength of a given page and mostly deals with backlink and page quality data.

PageRank doesn’t necessarily indicate that the site in question gets a lot of traffic, but instead, that it gets high marks for certain quality indicators favored by Google. So, a page can have a PageRank of 8, but the entire domain could have a PageRank of 6.

How Does This Play Out in the Real World?

Let’s say you find a site that has a high PageRank, but a very high (meaning bad) Alexa Rank. That could mean the site in question has some very high-quality links pointing at it, but its traffic volume is pretty low.

On the other hand, we could flip those metrics and end up with a site that gets a lot of traffic but doesn’t have that many quality links pointing at the domain.

In this case, the site could be getting most of its traffic from social media, or it could be picking up traffic from tens of thousands of non-competitive keywords.

Overall, these metrics should be used in conjunction to evaluate the strength of a competing site.

PageRank is probably more valuable for SEO as it pertains directly to backlink quality, while Alexa Rank can be a general indicator of the site’s traffic numbers.

But, it’s not entirely what it seems…

The biggest issue is you aren’t getting the whole picture when it comes to data.

Alexa can only collect data from the couple millions of users who use their site and tools. That’s a large enough number to give traffic estimates, but it’s not representative of its traffic numbers as a whole.

Also, if your site ranks over 100,000, then the data you’re getting about your site or a competitor’s site won’t be very accurate. You’ll be dealing with approximations, instead of actual traffic numbers.

You also won’t get a breakdown of the quality of the traffic. You can see bounce rate which is a useful stat, but it’s hard to extrapolate based on that data point alone.

You won’t find an original traffic breakdown, just traffic as a sole metric.

Overall, when it comes to SEO, getting precise data is important.

To improve, you need to check and monitor the right things. It’ll be difficult to create any meaningful SEO campaigns if you’re just using approximate figures.

So, if you take SEO seriously (and if you’re reading this, you probably do), then you might want to stay away from Alexa Rank as your sole traffic metric.

So… Is Alexa Traffic Rank Worth Tracking?

Now that you have a Jedi-level understanding of Alexa Traffic Rank, you might still be wondering, is it even useful to your SEO?

Well, yes and no.

It can be used as a more general traffic indicator. Or, as a way to brag to your friends that your site ranks higher than theirs (traffic-wise). But, it should never be used as the sole metric to indicate the strength of a given site.

Think of it like analyzing a keyword in Google Trends. This gives you a general trend of the keyword over time, but you’re not going to base a new website or campaign on that data alone.

Your best bet is to use a tool that combines multiple SEO metrics, like Monitor Backlinks.

When you’re tracking a domain with this tool, you’ll have a ton of different domain ranking factors all from your main dashboard, including Alexa Traffic Rank:

At a quick glance, you’ll be able to see your domain’s Alexa Rank, MozRank, Domain Authority, number of backlinks and more.

Hover over any of these metrics for a more detailed breakdown: 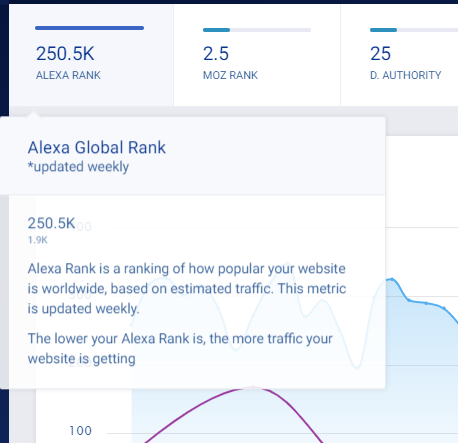 Usually, these will go hand in hand, but it’s not always the case.

Grab your free 30-day trial of Monitor Backlinks to try out all these features for yourself, commitment-free!

It works better when combined with other domain ranking metrics to help you determine the strength of your (or a competitor’s) website.

Your best bet is using a tool that combines Alexa Rank with other useful website metrics.

This will help you paint a more accurate picture of a website’s traffic, backlinks, quality and more.

Kevin Wood is a freelance writer who writes about technology and human potential. When he’s not diving headfirst into technical topics, you can find him scrawling lines of poetry and getting lost in the woods.