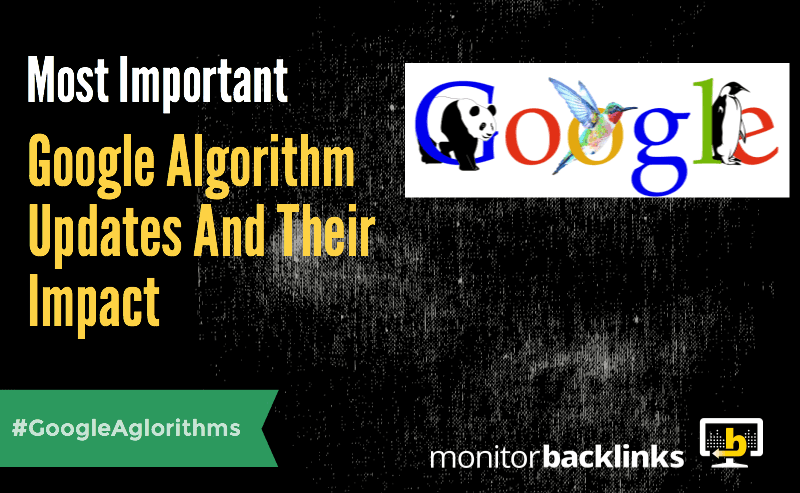 Most Important Google Algorithm Updates And Their Impacts

Search engines have come a long way. At the onset, ranking higher in search engines wasn’t an uphill task. More precisely, gracing top Google pages only required an entrepreneur to stuff content with keywords and add multiple links. In the recent years, however, numerous changes have been evident. With the recent Google Algorithm updates, SEO entrepreneurs have been spending sleepless nights on the best way possible of beating the tight Search Engine Optimisation race. So what are some of these changes and how significant are their impacts in the SEO industry?

Panda updates are some of the most common Google updates in recent history. The first update was evident in February 2011 and ever since, there have been multiple updates related to the same. The first update in February gave precedence to sites with high quality contents. More emphasis was laid on the quality of the website and associated web content. This update changed the way entrepreneurs handled web contents. Essentially, it was a revelation that ranking higher in search engines went beyond keyword stuffing.

Barely two months after the first Panda update, Google rolled out yet another update; Panda 2.0. It was a major crackdown on Spam content and it sent waves of fear amongst notable websites. The April 2011 update further enhanced the need for quality and authenticity in search engine optimization.

In September 2011, there was yet another Panda Update; Panda 2.5. Many websites reported losses; especially those with moderate contents. In May 2014, yet another historical Panda update came into being. Panda 4.1 update was meant to cut out widespread low quality content fever that was ruling the SEO arena. It was time for content rich websites to have a bite of the tasty first Google search pages.

Five months after the historical update, Google made another significant update. It was a further crackdown on low quality content with more emphasis on relevance and accuracy. It affected more than 5% of common queries. Most recently in July 2015, Google rolled out Panda 4.2 update that gave smaller and middle size websites with high quality contents higher preferences in search engine rankings.

Penguin update was rolled out in April 2012 as a crackdown on users who insisted on prohibited SEO techniques like keyword stuffing and inappropriate link building. It impacted search queries by up to 3%. After the first update in April, there was a minor refresh in May; hardly a month later.

On May 2013, there was Penguin 2.1 Algorithm update, which lay emphasis on duplicate content and spam. It was also a crackdown on other SEO black hat techniques with a major aim of making SEO fair and more idealistic. One year after the Penguin 2.1 update, google refreshed the ranking strategies through Penguin 3.0 update.

In September 2013, Google introduced the Hummingbird update. It was a major step in making search engines more user friendly and relevant to individual users. Essentially, the update ensured that the results focused more on the meaning of the search words rather the single outward phrases.

As a result, the results would be provided based on the finer details like behavior location and other essential aspects. Full question searches were given more emphasis.

It came in July 2014. In this update, Google focused on local ranking algorithms. It was a step towards ensuring provision of more accurate and relevant searches for local queries. This update established closer ties between the local searches and paramount Google Algorithms.

After announcing the possibility of removing Authorship details in June, Google finally put to effect this update in August 2014. As a result, Google ruled out the showing of authorship details besides articles as part of search engine results.

Popularly dubbed as Mobilegedon update, this update came in April 22nd 2015. It was a change that made the search engines friendlier to phones and mobile devices. Mobile friendliness became a major factor in ranking websites. Sites optimized for mobile devices greatly benefited from this major update. Ever since this major update, more websites have focused on being mobile friendly since more users have adopted mobile device preference when making searches.

In October 2015, there was a revelation through Bloomberg that Google had in place another significant Algorithm update. Known as RankBrain, this recent update gives power and precedence to the machine and artificial intelligence when it comes to Google Rankings. As a result, machine learning and Al Power are being considered as some of the most essential factors in Google rankings.

Besides the major Algorithm updates by Google, there have been other minor yet critical updates effected by Google. The Venice Update, which came in February 2012, influenced local searches. Because of the update, more localized results made appearances in wide queries.

The Knowledge Graph update on May 2012 is another important Algorithm fixes worth considering. In this update, there was emphasis on inclusion of relevant images and facts on search engine results. Apart from the conventional search results, there were added details including graphs and fact files to common results.

The Payday Loan Update was rolled out in May 2014. Google announced that there were evident modifications to Payday queries. It was an effort to phase out the rising cases of spam sites. It was a major surprise for SEO entrepreneurs who had not figured out the possibility of Google targeting niches in their Algorithm updates.

In September 2013, Google brought into existence the Exact Match Domain; a crackdown on low quality sites with stuffed keywords in their domains. It was aimed at making search results more relevant to the users. In August 2014, Google rolled out the HTTP/SSL Update. In this update, the search engine gave more preferences to sites with encryptions.

Search engine optimization, as an industry has come a long way. The ever-increasing Algorithm updates have made the SEO arena less predictable and more challenging. For someone setting foot in the SEO lucrative arena, taking critical analysis of these recent updates is a necessity if you want to make milestones in this incredible journey.

Derek Iwasiuk run’s national digital search engine optimization firm headquarted in Minneapolis. Also spends a lot of his free time educating the minds of thousands of young SEO’s and top agencies. You can also follow him on twitter @Diwasiuk

According to me, google RankBrain is the best inventions and changes on search engine. it can do artificial judgement for google search quality.
Thanks for your info and keep writing in future 🙂
Cheers Mate,
Ben

This update focused largely on targeting spammy links. Google looks at backlinks as a signal of a website’s authority and reputation, taking a site or page’s backlink profile into consideration when determining rankings.