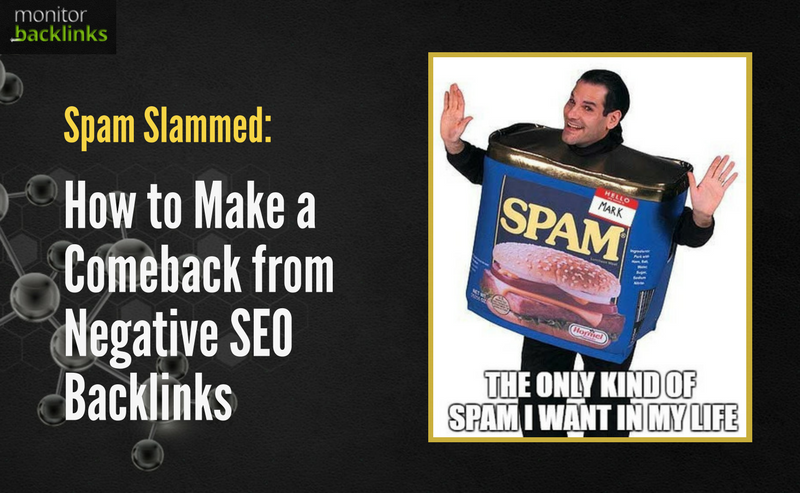 Spam Slammed: How to Make a Comeback from Negative SEO Backlinks

Just like the mystery meat that’s permeated the world at large, internet spam is as widespread as it is perplexing.

In the world of webmasters, a negative SEO attack is a serious form of spam.

To be clear: Not all spam is negative SEO.

Negative SEO is when competitors use spam purposely and strategically in an attempt to topple you from the top of search engine rankings.

In fact, most spam doesn’t fall under the umbrella of negative SEO.

But if your site is getting linked to by sketchy sites, this is the first sign that you may be under a negative SEO attack.

How Bad Backlinks Are Affecting Your Rankings

While there are myriad tactics your competitors can use in a negative SEO campaign, by far the most common and effective is linking to your site with bad backlinks.

No matter how much Google tries to downplay the importance of backlinks year after year, well-designed SEO studies continuously cite backlinks as one of the most important ranking factors in Google’s search engine algorithm.

And it makes sense: Backlinks are basically one site vouching for another site. If you have an authoritative site linking to yours, Google takes that as a vote of confidence in your site.

Because people recognized the power of backlinks, they started to abuse them. You could pay for other sites to link to yours or “buy links.”

Google took notice of this trend, and tried to put a stop to it with their Penguin Update. The Google Penguin Update was akin to putting a backlink hall monitor in SERPs to support sites with authentic backlinks and penalize those with fake backlinks.

Because of Penguin, it’s important to stay on top of your backlink profile. Bad backlinks make your site look bad in Google’s eyes, and could lose you rankings that matter.

If you think your site might be under attack from a negative SEO campaign, know that this is an unlikely scenario for most sites.

Doing negative SEO takes time and resources, so it’s likely not a worthwhile tactic for most SMBs trying to outperform a competitor.

Just because you’ve received some questionable backlinks doesn’t necessarily mean your site is under direct attack.

If your rankings have dropped and you’re wondering if it’s because of bad backlinks or negative SEO, you should check for these common reasons for lost rankings first.

It’s possible that you didn’t earn bad backlinks, but that you lost good ones.

Of course, you won’t know what you’ve lost if you’re not tracking your backlinks in the first place.

If you’re signed up with Monitor Backlinks, you’ll get an alert when anything in your backlink profile changes, which includes losing links.

Google updates periodically shake up SERPs and rock the SEO world. Check the web to see if what you’re seeing is part of a larger update.

Another possibility is that you’re part of a smaller shake-up—an isolated event where Google’s algorithm is correcting itself.

Try to see if you can figure out which traffic you lost by poring over your Google Analytics, which might be able to help you isolate what happened.

For instance, I was doing SEO for a local business in one of the many “Springfield”s who saw a sudden drop in traffic.

If your site is over-optimized for SEO or you’re doing any black hat SEO tactics like cloaking, you might be slapped with a ranking penalty.

If your site has gone through any major changes, you may see a drop in rankings.

I’ve seen site migrations and redesigns that have had trouble regaining the traffic they originally had, while others bounce back fairly quickly.

If you’ve gone through the above steps and you’re still convinced it’s possible you’re the victim of a negative SEO campaign, it’s time to take a dig through your backlinks.

Even if there’s backlinks that appear to be normal bot-spam, you’ll still want to take care of those.

Here’s what to look for when trying to identify bad backlinks:

Spam Slammed: How to Make a Comeback from Negative SEO Backlinks

If you found bad backlinks, it’s good anyway to get rid of them for your SEO.

If it appears you’re the target of negative SEO, take these three steps right away:

Performing a backlink audit means you’re analyzing your backlinks and deciding whether each goes on your naughty or nice list.

In your Monitor Backlinks account, the first thing you want to do is filter your backlinks by “dofollow.”

This will make it so that the backlinks you’re seeing are the ones that Google cares about. Keep the dofollow filter on while using other filters. 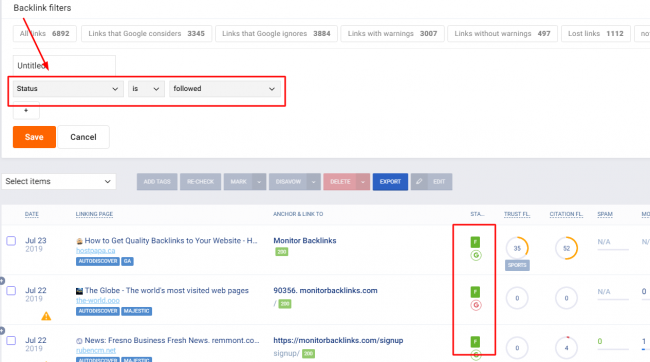 Then, filter by Spam Score, a Moz metric.

The Spam Score looks at a multitude of factors to determine the likelihood that a link is spammy. The higher the Spam Score, the more suspicious you should be of the backlink.

Try filtering by a Spam Score of three or higher by clicking on the Moz Spam Score column so that the links with the highest spam score are at the top:

This metric tells you how many other links on the backlinked page are also linking to you. If there’s over 100, it’s likely the backlink is bad.

You’ll need to visit the site and check the rest of its metrics as well to confirm it’s spam. 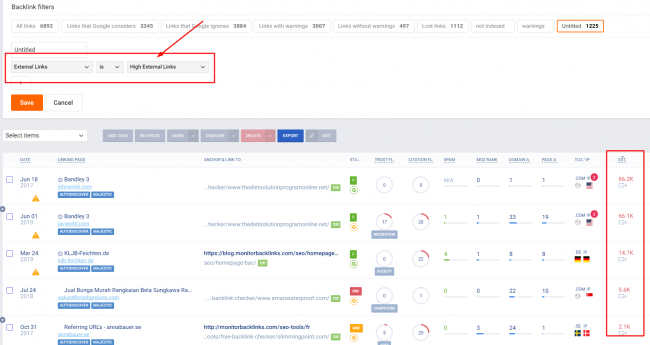 Domain Authority (DA) is another Moz metric that takes multiple factors into account to determine that site’s authority.

In general, the higher the Domain Authority, the better it is for your site.

Again, you’ll want to check the site manually together with its other metrics, since it could just be a newer site which hasn’t been around long enough yet to build up its DA score. 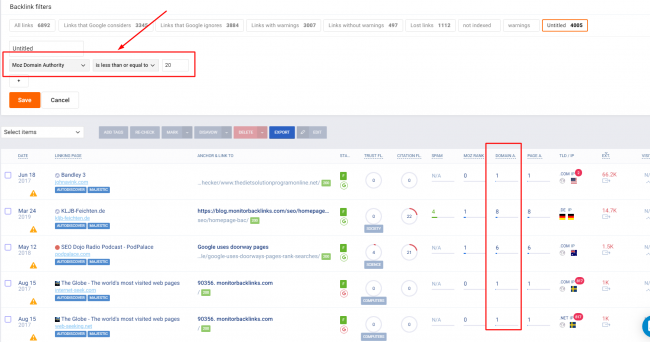 The higher the Trust Flow metric, the higher quality the backlink is likely to be. 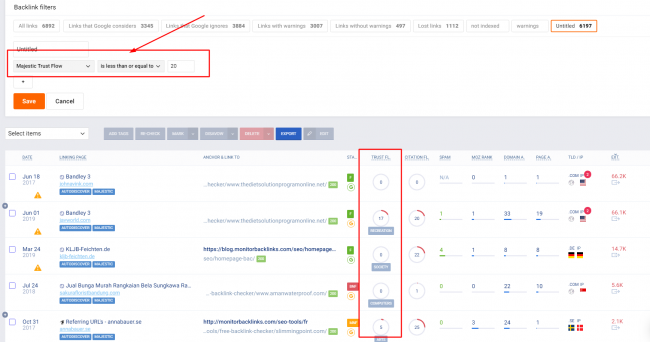 If a site isn’t indexed by Google, there’s a good chance it was penalized. You don’t want penalized sites linking back to you, so those definitely go on the naughty list. 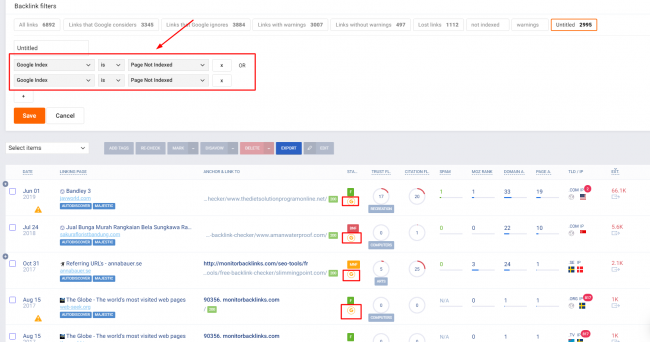 It’s possible you’d get penalized by Penguin if you have over-optimized anchor text, so make sure you check your backlink anchor text too.

A good backlink profile will have a pretty even mix of exact match, partial match, phrase and branded anchor texts.

So, if you’re seeing significantly more of one type of anchor text (especially exact match, which can be seen as spammy if over-used) used in your backlinks, that could potentially indicate an influx of spam links to your site.

Once you have a list of bad backlinks, it’s time to disavow them.

Disavowing backlinks is a way to tell Google “I want nothing to do with these backlinks, please and thank you for not associating them with my site.”

This helps Google protect sites like yours from getting hit with a Penguin penalty caused by spam or negative SEO.

Another option is the Google disavow links tool. Simply upload a .txt file of all your bad backlinks to Google Search Console.

Before you get trigger-happy and disavow a huge list of backlinks, make sure you’re erring on the side of caution. In other words: Don’t go overboard with disavowing links.

While you do definitely want to disavow backlinks that are obviously bad, leave the backlinks you’re unsure of alone, just in case they’re helping you.

It’s always better to be ready for a negative SEO attack than it is to be reactive to one and be late to the party.

Monitor Backlinks alerts you of any changes in your backlink profile, including if spammy-looking backlinks are preying on your site, making it easy for you to catch potential threats before they affect your rankings.

Sign up for a free trial to find out if your hunch is correct and you’re the victim of negative SEO backlinks.

You’ll be able to see exactly which sites are linking to you, sniff out the spam and disavow bad backlinks all from within the tool—while being alerted whenever anything changes.

With increasing competition for the top spots in SERPs, bad backlinks are a serious threat to all webmasters.

That means protecting your site from spammy backlinks and negative SEO attacks is just as important as creating quality backlinks for your site.

Monitor Backlinks makes managing both your good and bad backlinks straightforward so that you can breath easy.

Stay safe out there!

Hillary Patin uses her writing and SEO skills to help businesses grow. When she’s not busy doing SEO, she writes quality content for personal finance blogs. You can see her writing portfolio at hillarypatin.com. Her background in behavioral economics and incessant curiosity keep her hooked on all things SEO and finance.