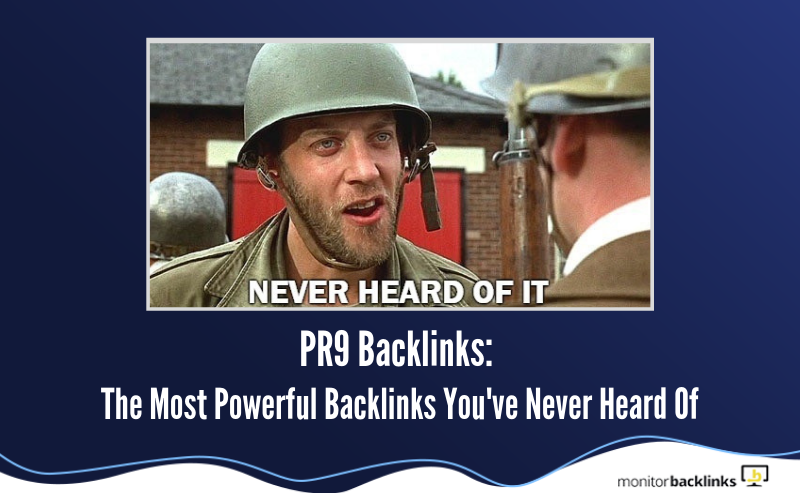 PR9 Backlinks: The Most Powerful Backlinks You’ve Never Heard Of

There’s a lot of mythology surrounding PageRank, especially if you’re new to SEO.

Everyone seems to have an opinion about it…

…and it can be confusing if you even need to pay attention to PageRank, since it’s just one of the myriad of signals nowadays.

I decided to clear this up once and for all and give you the 411 on PageRank.

(Including how to get some of those elusive PR9 backlinks.)

PR9 Backlinks: The Most Powerful Backlinks You’ve Never Heard Of

Let’s start with a brief primer on what PageRank (PR) actually is.

PageRank is an internal Google metric that determines the authority of a website.

Google calculates PageRank on a scale from 1 to 10, with PR1 being the lowest and PR10 being the highest. Most sites on the upper tier are PR8 or PR9, as PR10 is very elusive.

Obviously, backlinks from sites with a high PageRank are more powerful. This led to a lot of SEOs measuring a site’s value solely based on PageRank.

…so why don’t you hear about PageRank all the time right now?

Google stopped supporting it a few years ago.

So Google still uses PageRank internally, but they don’t report it to SEOs. You can’t view PageRank using a Google tool like you used to be able to.

(But if you’re really dedicated, you can calculate it yourself.)

The SEO world scrambled to create a replacement… which ended up being Moz’s Domain Authority (DA).

Mox created Domain Authority to replace the hole in our data left when Google removed PageRank. Now, most SEO tools use DA to measure the authority of a webpage.

Essentially, Domain Authority is the new PageRank, in the same way that “fetch” is the new “cool.”

The only major difference between the two is that PageRank describes an entire site, but Domain Authority can fluctuate between individual pages on a site.

In other words, Domain Authority is more granular than PageRank was.

But how closely does Domain Authority resemble PageRank?

Pretty well, as it turns out. Domain Authority correlates with PageRank.

According to Link Assistant, there’s a very strong (0.95 Pearson’s) correlation between Domain Authority and MozRank…

…and Moz claims a good (0.45 Pearson’s) correlation between MozRank and PageRank.

Basically, Domain Authority is a really good indicator of PageRank. But it’s not 100% accurate.

(For example, a Domain Authority of 90 is roughly equivalent to PR9.)

How to Find a Site’s PageRank

Most modern SEO tools opt to show Domain Authority over PageRank because PageRank has fallen out of favor.

But if you really want to know a site’s PageRank (and don’t want to calculate it yourself), you can look into the Open PageRank data, which is free forever.

Like I mentioned above, PageRank is only calculated at the domain level, so the Open PageRank data only goes that deep.

First, you have to create an account on the Open PageRank website. They’ll verify your email and then you can get started with the site.

From there, the tool is pretty easy to use. Go to the homepage, paste a list of domains you want to analyze, and click “Get Page Ranks.”

So by now, you’re probably wondering…

What does a site with high PageRank look like?

Some Examples of PR9 Sites

Since PR10 sites are so few and far between, I’m going to focus on sites that have attained PR9 status.

(And even then, it was a hard time coming up with some PR9 sites!)

PR9 sites typically fall into one of three categories:

1. Strong tech names. The early movers of the web who are still relevant today have the elusive PR9 category. This is the most common category of PR9 sites. Amazon, Adobe, Flickr, Microsoft, WordPress and Apple are all PR9.

2. Google services. Both Blogger and Google Docs are PR9.

3. Wikipedia. Given that almost everyone links to Wikipedia at one point or another, this really shouldn’t be too surprising. 🙂

The scarceness of PR9 sites means your chances of getting to PageRank 9 for your own site are nigh on impossible.

(Even PR8 is difficult! But PR7? Much more attainable.)

But that doesn’t mean you can’t get backlinks from PR9 sites.

Should You Focus on PR9 Backlinks?

Well, the short answer is no.

With everything above taken into account, PageRank (and Domain Authority, for that matter) aren’t always the best metrics to use when trying to build links. Oftentimes, links from high-authority sites in your niche are worth more than generic PR9 backlinks.

For truly effective link building, you should focus on high-authority sites in your niche instead of just any site with a high PageRank or Domain Authority.

It’s also worth noting that getting PR9 backlinks from Amazon, Adobe, Flickr, Microsoft, WordPress or Apple is going to be extremely difficult, if not impossible for most niches.

And I’m not even sure if you can get backlinks from Google Docs.

But, there are some things you can do instead.

How to Get High-Authority (and High-PR) Backlinks

We’ve talked about basic link building before, but that typically won’t work with really high-authority sites.

Not because they’re so big (though that is a factor).

Mostly because these sites aren’t blogs. The high-authority sites you want to build links from are well-known brands, government agencies, universities and news outlets. They’re fundamentally different than a typical company blog.

Here are the three most effective strategies:

Wikipedia is one PR9 site that might be worth your time. Be aware that backlinks from Wikipedia are nofollow, so they’re not going to directly affect your rankings in the SERPs.

That said, the Trust Flow from a Wikipedia backlink can be invaluable.

…but since Wikipedia is carefully monitored, you need to ensure you have Wikipedia-worthy content. I’m talking original, first-hand research or expert authority on a subject.

For more details on this process, head over to our Wikipedia link building guide.

Your competitors’ backlink sources can be a goldmine of high-authority link building opportunities.

Using a tool like Monitor Backlinks, you can track the backlinks your competitors are getting, and replicate their best ones for your own site.

Just sort their backlinks by Trust Flow or Citation Flow to see the most authoritative links first, and work your way down the list.

Here’s a detailed guide to the competitor backlink analysis process.

And if you don’t have a Monitor Backlinks account? Grab your free, no-risk trial here!

3. Get backlinks from .gov and .edu sites

Government agencies, universities and other .gov and .edu sites give some of the most authoritative backlinks you can get.

And if you want to kill two birds with one stone (I approve), try the scholarship strategy. You need to be willing to put in some extra work and front a not insignificant amount of money for this strategy, but it works!

And finally, make sure to check out our guide to advanced link building for more actionable strategies to help you build backlinks from those tougher sites.

PageRank is no longer a public-facing metric. Because of this, it can be confusing to get accurate data about it, and I don’t recommend using it as your only metric when measuring the authority of a domain.

So instead of trying to win PR9 backlinks (which is probably not the best use of your time), focus on earning backlinks from high-authority sites in your niche.

These can be a huge win for your future SEO efforts and give you an edge to beat out your competition in the SERPs.