Proof That Guest Blogging Is Not Dead, Coming Right From Google

A few weeks ago, Matt Cutts announced that guest posting is done, and you should “stick a fork in it”. Over the years, Google has made a number of statements about guest blogging as a link building technique. Matt’s last announcement caught the attention of all the webmasters and SEO experts. Unfortunately, everybody panicked, and we started to hear the meaningless phrase “SEO is dead”, once again.

The truth is that guest blogging is not dead and most likely it will never die. Why do I say that? Well, let me show you an example.

Yesterday, while I was checking my Twitter feed, I noticed something that caught my attention. It was this tweet, from Google Analytics:

Guest post on our blog from @johnpkoenig – Storytelling with data using @Measureful and Google Analytics: http://t.co/Wb8oZP5WQu

So Google is accepting guest posts on their website, that’s interesting. I immediately opened the page and checked the author bio, and to my surprise, it contained two dofollow links. 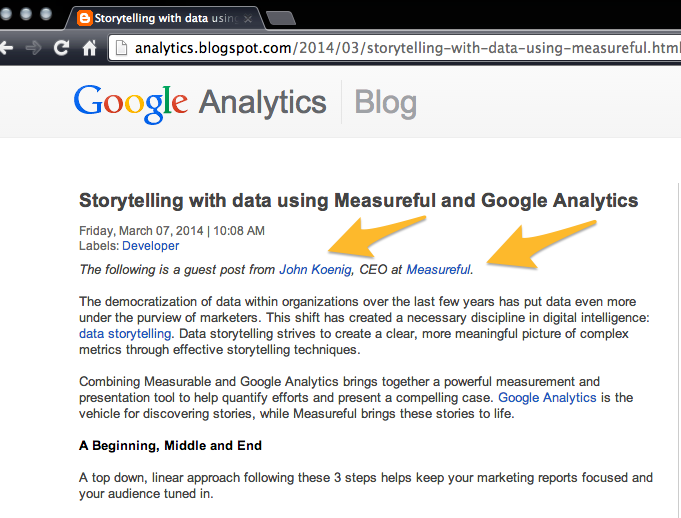 If Google is accepting guest posts on their Analytics blog, what does this mean? Well, that’s the proof that guest blogging is not dead, and you should not stick a fork in it. Period! What you should do, is to raise your guest blogging standards.

Instead of sending hundreds of spammy requests per day, to people that you have never heard of, concentrate your efforts on writing for websites that have an established community.

Guest blogging is not all about link building; it’s about driving relevant traffic and building an audience on your website. Unfortunately, many understood this wrong, and they became guest spammers and dofollow link hunters.

What will stop working are the useless unsolicited guest posts on very low quality blogs.

So, what do you think about this? Have you stopped writing guest posts, after Matt’s announcement?

The Most Stupidest thing people use to say all the time is “SEO Is Dead”
SEO can’t be dead . Actually Google made all this algorithm .. and who made Google?
HUMAN BEING … So Millions of blogger all over the world actually Won the Game against some minds sitting in Google…
and what Google made is named as SEO and the Loop Wholes which Bloggers from all around the world found in there system are now called as SPAMMERS !

So Don’t Get Frustrated at All ! SEO Is Not DEAD but CHANGED ALOT .. and Still in a Process and will always be in a Process of Changing or Developing !
ACTUALLY ITS THE BEST PART OF ANYTHING “DEVELOPMENT”

The problem is people didn’t know about the quality of guest posting content it self. Their goal is just only to get link, but that’s totally wrong. I agree about the audience acquisition and I think this is more important for Me.