Good backlinks are hard to come by these days.

It can take a lot of time to craft the best piece of content and deliver the perfect outreach email, only to be let down more times than not.

If you’ve ever had your ear to the ground in the SEO universe, you’ve probably stumbled across the idea of using Tumblr to build links to your site.

Tumblr backlinks are some valuable lower hanging fruit that don’t require much time or expertise.

They may not take you from the fifth page to the first page for all of your keywords, but they can definitely move the needle.

This post will show you how to use Tumblr effectively for SEO, and give you some strategies for building legitimate Tumblr backlinks.

A History of Tumblr Backlinks

Tumblr is a blogging platform, similar to WordPress or Blogspot.

Because content is so easily shareable, it became a popular trend a few years ago to utilize Tumblr for high quantity link building.

First, you’d create a blog on Tumblr—a subdomain living on Tumbler’s site. Here you can create a post and link to your website.

These posts can also be reblogged and shared by others—each time creating an additional link both to your Tumblr post and to your website.

You can understand the hype. Especially when you consider that all of these links are living on a site with a high domain authority.

The best part: Up until 2016, these were all followed links. Tumblr was a goldmine of backlink opportunity!

In 2016, Tumblr began using Javascript redirects on most external links, taking away most of everyone’s beloved link equity.

However, Tumblr left links embedded within images as followed links.

And this takes us to the present day, where the debate rages on across forums everywhere.

Are Tumblr links good for SEO?

Or maybe a better question: Are they worth your time?

Take a look at an SEO forum or on Reddit and you’ll find all kinds of takes and opinions on building Tumblr backlinks.

Are Tumblr Backlinks Good for SEO?

We’ll address a few things as we answer this question:

If you utilize Moz’s domain and page authority metrics, you’ll notice that Tumblr has a domain authority of 60, indicating that it’s a relatively trusted and credible website.

When you create a blog on Tumblr, you’re given a subdomain on their site (myblog.tumblr.com). You’ll notice that new blogs built on Tumblr as subdomains start out with a page authority metric of 30, and often grow quickly as they gain links and traffic.

However, note that Google doesn’t view subdomains as carrying the same authority and credibility as the main site.

And because a Tumblr blog lives on a subdomain, a Tumblr post won’t have the same ranking potential as, say, a post on Medium. So, realize that a link from a Tumblr subdomain is not the same as earning a link from Tumblr itself.

Again, this makes this link building tactic pretty tempting. Every time someone else on Tumblr reblogs your post, you’re earning a link to your original post and to the page on your website that you’ve linked to.

However, as stated above, it’s important to note that every link you’re earning on Tumblr is from a Tumblr subdomain that may not carry a ton of weight for you.

As noted above, Tumblr did away with followed links to external sites some time ago. However, they left links embedded within images as followed links.

So links to your site found within copy amount to about the same weight as a link from Twitter—they’re mostly viewed as positive social signals.

Though there have been instances of people earning manual actions and penalties from building links from Tumblr, they are relatively safe. Unless it appears you’re gaming the system, or your link profile contains 100% image links from Tumblr.

At the end of the day, Tumblr still holds a ton of potential for building links. So how to do it?

How to Build Tumblr Backlinks

Your first step is to create an account on Tumblr. It’s free, quick and easy. 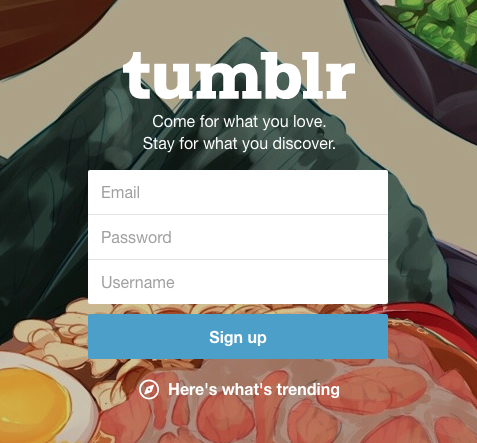 Once you have an account, you need to set up your blog page. Tumblr offers easy changes to your blog’s appearance, but not a ton of flexibility for customization.

One thing we’d recommend is linking to your website in your description—another place to earn a followed link. 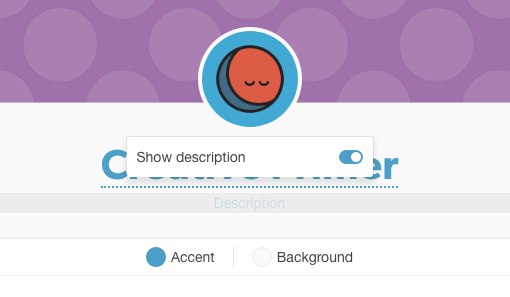 Another recommendation is to link to your Tumblr page from somewhere on your site, preferably in the same place you link to your other social accounts.

This should indicate to Google (especially if you use the same name as your site) that the two are connected. So as you grow in popularity on Tumblr, Google will know to attribute the social signals to your site.

Your next step is to brainstorm some content that you feel will be beneficial to people on Tumblr.

But keep in mind that photos are your opportunity to earn followed links.

Tumblr is a great place to test out content ideas and see what catches. If you’re thinking about writing a blog on puppies in a few weeks, post a blurb and a photo of puppies to Tumblr and see what happens.

(Hint: Anything to do with puppies will probably do pretty well.)

Posting on Tumblr is as easy as finding the pencil icon in the top right corner, choosing your medium (text, photo, quote, etc.), and posting away! 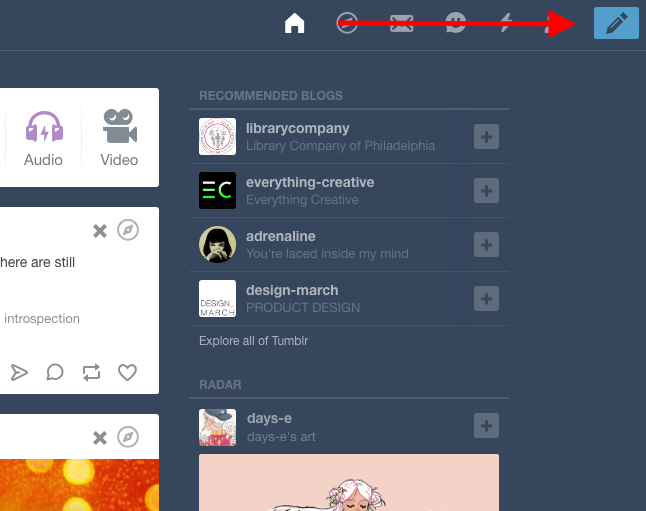 Don’t forget, in order to secure the followed link, you’ll need to post a photo.

So when you’re prompted to choose a medium, select “photo.” This will open a window where you can upload a photo.

Once you’ve done this, locate the link icon in the bottom left of the image to link it. 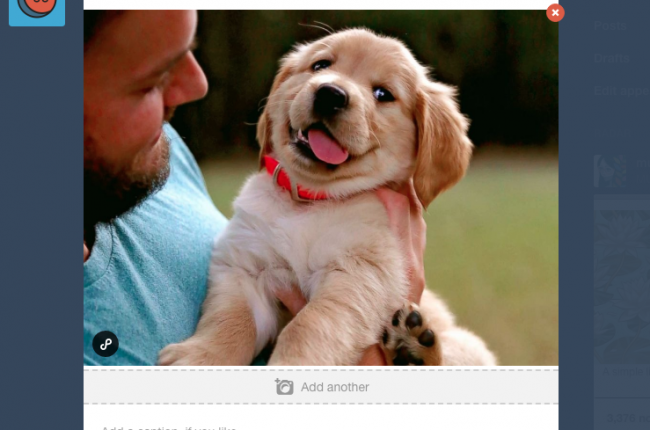 Once posted, navigate to your blog at your Tumblr subdomain.

Note that within the dashboard, the link may show a Javascript redirect. But on your actual blog, you’ll see that followed link goodness: 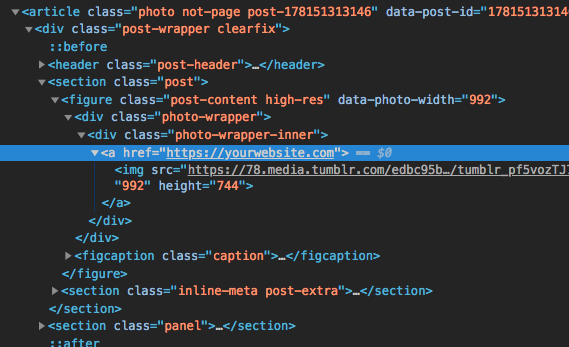 And there you have it. Now go get reblogged and build those Tumblr backlinks!

If you’re going to be building links, it’s important to track them—and to also find out if you have any links from Tumblr already!

Monitor Backlinks is the best way to do this. If you haven’t already, you can sign up for a free 30-day trial and go through the quick and easy process of setting up an account.

Once you’ve registered, simply add your domain and start tracking your links!

Take note of any current links you have from Tumblr by using the filters. Just search for backlinks from Tumblr.

Then, keep track of new Tumblr links as they start pouring in!

Monitor Backlinks sends handy notifications to let you know whenever you gain new links (or lose them), which makes your job nice and easy. Learn more about how to track backlinks with Monitor Backlinks.

A final idea to keep in mind as you set out to use Tumblr for SEO:

In addition, search engines love a healthy and diversified link profile. A well-rounded backlink profile is a healthy one.

Now get out there and become a Tumblr master.

And don’t forget: If nothing is working, try posting a picture of a puppy to get things rolling 🙂

Brooks Manley is an SEO Project Manager at a digital marketing agency in Greenville, SC. He loves the internet, the NBA, and writing at
brooksmanley.com.